Bitcoin: It’s Valuable And Increasing Exponentially As A Unit Of Trade 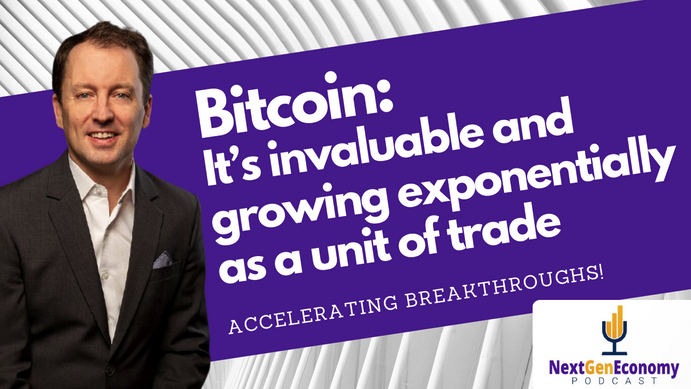 While they are likely to rise in popularity because they are cause-related, smaller tokens need to move towards the ability to convert on exchanges. And, then eventually, they might get enough traction where people and companies will want to take them as a direct payment.Angela Faye 21 Oct 2021

If you are imagining, managing, or building a creator business or community to be more #futurproof, we invite you to enjoy this article and accompanying podcast highlighting:

Bitcoin at its core is a ‘trust protocol’

If we are talking about Bitcoin and crypto, one of the fundamental questions you really have to ask is…what is it? The usual answers are: “It’s a payment network.”  “It’s a value store.”  “It’s money.”  “It’s digital money for the digital age.”  It is all of those things, but actually, those answers are incomplete. What it is at its very core is a trust protocol, and it solves a computer problem of how do you do trust on the internet without a third-party intermediary, and then the network handles trust.

When you think of it as a trust protocol first, you can start to wrap your head around where it’s going to go as the evolution of the internet.

The internet is made up of seven technology leaders and they call this the OSI technology stack.  What it represents is quite literally the plumbing of the internet – it’s how the internet works – from layer one, the outlet on the wall, and layer seven, websites, and all the stuff in between – that developed over time to make standard internet functions work.

Bitcoin comes in there as layer eight to the seven-layer stack – the trust protocol that we tried to do in the nineties, and we failed. So that’s what Bitcoin solved. And when you see it as trust first,  you will start to understand that money and payments are just a first use case.

This new phase of the internet – a continuation of its evolution, with bitcoin and money and payments as the first use case, we are seeing the democratization of finance.  And, we’ll see so much more as we change the dynamics of trust online.

We’ll see an ability to reduce corruption worldwide by creating transparency at scale for many different applications beyond money.  Plus, many other applications we cannot even imagine yet.  We’re really just ‘setting the table’ for these things over the next 20, 30 years as the world shifts – and as the optimists believe, transforms to a better future.

Bitcoin to other cryptocurrencies is like ‘reserve currency’ to all the world’s global monetary currencies.

Bitcoin is the first and the anchor of the industry.  It had a weird kind of birth where no foundation established it – it just morphed into itself, so there’s really no central head to it. It is truly decentralized.  While other tokens are for specific projects, utilities, validations, etc., bitcoin is the purest one, and it is the one that represents native digital currency for the internet age.

People new to the crypto space can look at Bitcoin first. There are a few exchange platforms – such as netcoins.ca – where you can open an account, buy a little bit of Bitcoin, get into it, slowly, read a lot about it to understand what it is.

What is the Lightning Network, and why is it so important to the crypto industry?

The lightning network is called a layer two solution. What does that mean?

The internet has been scaled up to multiple layers of technology. Bitcoin follows the same philosophy where there is the base layer, which is really secure – where you get your wallet and buy your Bitcoin. And, it might take a few minutes for the transaction to complete. Layer two solution lightning network runs on top of it and interacts with layer one. This ultimately solves Bitcoin speed problems.

So how does it work? It works very similarly to how the internet works. So what you have is a series of mesh networks, like the internet. You have a series of nodes. Nodes are just simply computers, servers. And on those servers, you’re running the lightning network open-source software, which is open source – anyone can use it, anybody can fork it, it’s part of the internet.

Within that software on the lightning network, you can open up a payment channel to exchange with other people all over the world – routing nodes connected to other nodes send a transaction, and it might go through eight or nine hops until it reaches its final destination. Lightning Network provides the ability to do millions of transactions a second, enabling small purchases, rapid purchases, and micro-purchases [worldwide].

Plus, you can’t get away from the Lightning Network if you’re building out tech stuff using payments, anti-spam security, and communications.  It’s what the next generation wants; and, it’s morphing around the world at a very increasing rate. Whether you deal with it today, or sometime in the future – you’re going to have to – it’s going to cross your path and it’s coming like a freight train.  Avoiding it is like trying to not use the internet back in the late nineties. Eventually, you had to use it.

How will smaller crypto’s – like the ExO Token – interact with bigger, more mainstream cryptocurrencies?

While they are likely to rise in popularity because they are cause-related, smaller tokens need to move towards the ability to convert on exchanges. And, then eventually, they might get enough traction where people and companies will want to take them as a direct payment.

In one use case, the ‘ExO Token’ is a native utility token of ExO Economy used to date to primarily facilitate trade and exchange of knowledge between the OpenExO Community of coaches, consultants, investors, entrepreneurs – a group growing to 18,000 global business leaders.  As a Member of the Community, you can access ‘Staff on Demand’ for early-stage advice in every innovation niche imaginable!

While probably another three to five years out, the next 24 – 36 months are a real revolutionary phase where hybrid traditional-digital markets are really going to wake up and get exciting.

Armies of developers – the best and brightest backed by massive amounts of capital – have been born and bred into a culture of disruption; and, they would love nothing more than to take a 600-year-old banking industry and Wall Street and turn them on its head.

It’s amazing how there are so many similarities between what’s going on with Bitcoin and the crypto space and the internet back as it was morphing into mainstream being.  Back in the early years, there were popular and public views that the internet was evil and bad; and new laws were trying to be passed in terms of how they’re going to regulate it, tax it, etc. But all the bluster went away – it came, and went; and the internet became widely accepted, used, championed by consumers, business, and government alike.

And now, for generations coming up everything’s digital. The next generation doesn’t care about printed money per se.

‘The biggest risk to consumers, businesses and governments alike now is inaction in the crypto space.’ – Shone Anstey, LQwD

Is 600 billion a fair estimate on the value of ‘trust’ on the internet?

Going back to 1998-99, there were estimates that the internet was worth about $180 billion. That is what it would take Microsoft and Yahoo or other big companies to rebuild the internet. Then you fast forward about 2004 and Google goes public, and there were estimates of the internet being worth $3-4 trillion. By 2010, people thought it was worth $20 trillion. And now, it’s an unfathomable number of what the Internet’s worth.

What is the eighth layer, the layer that does trust what’s that worth right now, we’re saying it’s worth 600 billion, that’s it?

Something which is going to revolutionize the entire internet? And it happened right away, but certainly, as its value is unlocked, it has the potential to, to really do, to hit astronomical numbers because it represents a fundamental change to how the world will work.

Let’s say you want to take a cryptocurrency as payment for a product or service – for this example, Bitcoin using the Lightning Network.

You can sign up with a company like LQwD, a Canadian business that is the first publicly listed Lightning Network company.

For business-to-consumer companies, you can sign up, hit a button, get a lightning network note and a channel, and get backed with LQwD’s liquidity. You now have the ability to create invoices, receive payments immediately on the network with instant settlement. And, you’re in full control over that.  The technology is being built in for the first time ever, where you can be paid on a streaming basis and you can be paid in real-time – for these transactions, you aren’t beholden to banks or credit card companies restricted timelines and fees. LQwD takes away transaction complications, and it’s very easy and very low cost.

For business-to-business companies, LQwD is working with other wallet providers to help ensure that they have liquidity for their clients; and connects them to the rest of the Lightning Network.

OpenExO Community: Transforming the World for a Better Future

What is the Lightning Network and How Does it Work?, Coin Telegraph: the future of money

Where cryptocurrency is taking off around the world, MacKenzie Sigalos for CNBC

Featured Entrepreneur: Shone Anstey brings 20 years of experience in building complex technologies and software within search, analytics, and data centre operations. Engaged with cryptocurrency since 2012, Shone has acted as technology lead for an industrial Bitcoin mine and Bitcoin mining pool, and is a Certified Cryptocurrency Investigator. Shone is the CEO and Co-founder of LQwD, the first publicly traded, pure-play, purpose-built bitcoin company that’s focused on solutions that power the growth of the Bitcoin Lightning Network.  LinkedIn  | Twitter

Host | Content Creator: Angela Faye is the Founder of Futurville, whose massively transformative purpose is “Imagining & Building Places Worth Living For”, and her moonshot is creating 1,000 new villages of the future & supporting 1 million existing villages to become more #futurproof.  LinkedIn | Twitter

Executive Producer: ExO Angels(™) provide funding for the creation and distribution of the exoskeleton roadshow(™) and NextGen Economy(™) initiatives and is a sponsor for the Augmented Human Performance Village.

Disclaimer: The views expressed here are not those of OpenExO Inc., its members, affiliates, or associates.  The content is provided for informational purposes only, and should not be relied upon as legal, business, investment, or tax advice. You should consult directly your own appropriate advisors and professionals as to those matters.